This blog was created to inform my family and others interested in the new mega-development in Morelia that is being billed as the ¨New Morelia¨. It includes the Montaña Monarca project, and Ciudad Tres Marias. 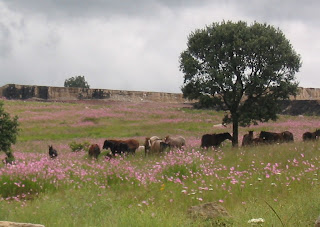 
The photo below shows the tower in the Torres Monarca project, which is near the Tec de Monterrey. It was taken from the balcony of my bedroom, hence you can see why I have a vested interest in the Montaña Monarca Project. 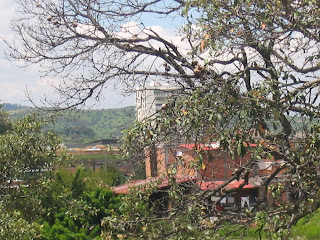 I am by no means an expert on this. What I state in this blog is based on chismes (gossip), and what I have learned from forums in Spanish on the internet. I hope those that are informed of new developments in these projects will share their knowledge with me by leaving comments in either Español or English. I hope to update this with more photos as the months progress.

I took this graphic and photo off of another site. They show the small strip mall in front of the Tec de Monterrey Campus. If you drive towards Jesus del Monte out of Santa Maria in Morelia, you will come to a traffic circle. Going right at this circle will bring you to the Tec campus, further on are several developments, the Torres Montaña, and the new golf course calles Bosques Montaña. (see below) 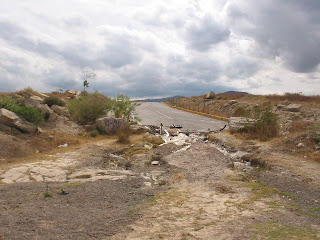 Going around the traffic circle (left), will lead you to this dead end street. The construction for Paseo de Morelia is just to the left of this photo. This avenue will eventually be connected to the 2 tunnels (4 lanes in total) that will wind down to the intersection of Camelinas and Blvd. Sanson Flores, near the IMSS.

These photos were taken at the end of the street leading down from the traffic circle. Somewhere below these trees will be 4 lanes of traffic going through tunnels. This is a reality, tunnel construction starts any day now. It has been approved by the government, and a contractor has already gone through the solicitation process. The contractor is from a mining company in Northern Mexico, Chihuahua I believe. 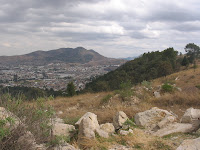 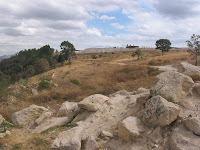 This photo below shows you the view up here. The cathedral is just to the right of the construction shack, through the trees. 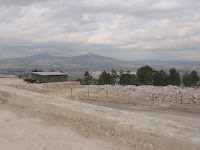 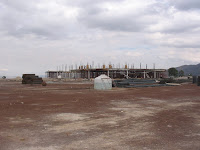 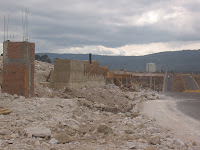 Entrance to mall, and beginnings of the construction. If you scroll up to the first photo with the horses. You will see the construction grading in the background. This is how the project was 2 years ago. But with the elections in the past, construction has started anew within the last few months. 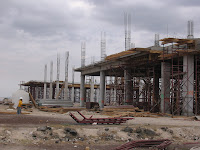 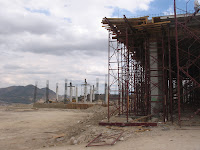 Paseo Morelia is a small part of what is planned for the "Nuevo Morelia".

You have two major players in this arena. The first is Enrique Ramirez, of Organizacion Ramirez fame, his project is the Tres Marias Country club, whose course was designed by Jack Nicklaus (www.tresmarias.com.mx). It hosts a LPGA tour event every year. ¨"Ciudad Tres Marias" is currently building a highway connecting it to the airport. It is home to several schools, including the UNAM satellite campus. 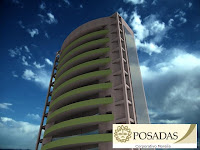 Enrique wishes to construct one of the largest Convention centers in Mexico to attract corporations to locate their corporate offices here for their executives, kind of like a mini Stamford CT, I guess!

One company that is rumored to have signed on is Posadas de Mexico, this is a computer image of its proposed corporate tower to be built in Ciudad Tres Marias.

Of course, Organization Ramiriz also owns Plaza Las Americas, which is getting a facelift. I have driven by those boarded up construction site, but did not realize the extent to the cosmetic surgery to be performed. Below are some computer renditions of the design and photos of what is going on behind those fences. It surprised me. 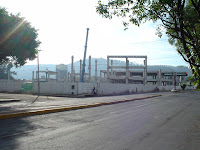 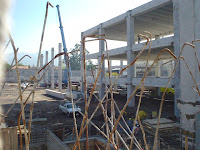 Ray great news about Morelia. I will like to know more about this and contact you if possible.
Alejandro Compean