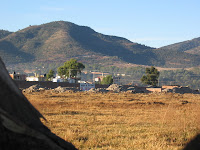 The second major player in la Nueva Morelia is Francisco Medina, a local entrpreneur with auto dealerships throughout Mexico. He is the principal owner of all the land up here near Jesus del Monte that will become Montaña Monarca. The company GICSA is the contractor behind the Paseo de Morelia mall. They are a large contractor out of Mexico City, it is rumored that Carlos Slim is behind GICSA. Paseo Morelia will be the largest mall in the GICSA system, and one of the largest in Latin America.

As stated earlier, Enrique Ramirez has his pet golf course, not to be outdone, Francisco "Paco" Medina is now constructing his up here. Below are the photos of what will become Bosques Montana CC. Keep in mind, 3-4 months ago, I was walking through these woods, they were just starting to move dirt around. 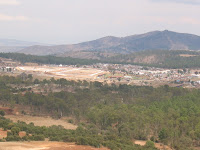 The photo at the right was taken from the highest point in the perimeter road that runs around the golf course. The brick structure in the middle (click on photo to enlarge it) is Los Corporales Salon de Fiesta. The white tower for the tech would be just outside of this photo to the left. The author´s home is in the distance in line with Los Corporales at the far tree line. 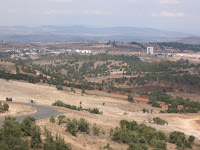 This photo was taken from the same spot, just moving left. The Tec Tower can be seen, and behind that in the distance, is the new construction for Paseo Morelia. You are looking north. The foreground sandy areas are where the golf course is. 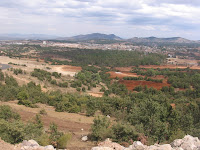 Same vantage point, just moved the camera to the left, Golf holes in foreground, the white buildings in the distance are in the gated community of Punta Monarca. I really believe that Bosques Monarca will be the neighborhood to live in Morelia. Much more naturally scenic than Tres Marias. 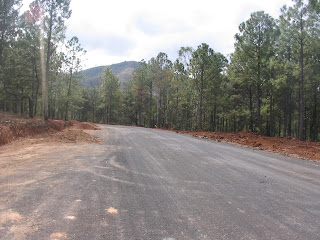 Here is part of the perimeter road around the golf course. After hiking through these woods over the years, my only hope is that they will zone this community for at least 1 acre lots.
Posted by Raymundo at 3:00 PM